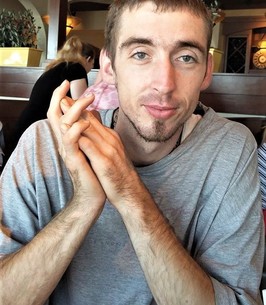 Aaron Jacob DeGeare, 35, of Kansas City, MO passed away after a house fire on May12, 2020. Born to and survived by his parents, Larry and Becky Stewart of Independence, MO.

Aaron was also survived by his daughter Alexandria “Lexi” Marie DeGeare of New Orleans, LA, his siblings Ashley Britton of Kansas City, MO, Amber Smith of Kansas City, MO, Brittney Stewart of Independence, MO, and his 8 nieces and nephews, all of which adored him.

As a child Aaron always loved to fish, climb trees and run with his childhood dog, Duchess. Aaron and Duchess were best friends and would always play outside together and they would go sledding every winter. This bond led to a love for animals and Man’s Best Friend has always been by Aaron’s side. Aaron would take long bike rides with friends and siblings and only come home when it was time to eat; he has never been one to miss a meal or any event that involved food. His friends and coworkers would sit in awe at the amount of food he could inhale in a single sitting.

As a teenager he loved fast cars and loud music. He always had more than one car and one was always being worked on. He became an accomplished mechanic and he would put those skills to use helping his friends and neighbors.

The highlight of his life was when he became a father to Lexi. He was such a great dad. He shared with her his love for dogs and the outdoors. They enjoyed going camping, fishing and going to school dances.
In the past few years Aaron was able to connect with his sister on his biological fathers’ side, Lorrie Brooks, and since then they became very close.

Aaron was a great son, father, brother, and friend. He gave the best hugs and he had such kind eyes and has always had a heart for God. He was known for always being helpful, he would drive across town to pick you up if you needed a ride, he would be there to help you move or fix your car. He had such a generous spirit and he was always there for everyone and would do anything he could to help. In fact he made the decision to be an Organ and Tissue donor. He has saved the life of two men with other’s pending matches. One of those was through a heart transplant to a 65 year old male, so his loving heart is still beating.

A celebration of life will be planned for a later date. We will finalize details once the city restrictions have safely been lifted. All details will be posted to Aaron’s Facebook page or the website www.asimplifiedfuneralsolution.com so family and friends can attend.

CremationH20 and services have been provided by A Simplified Funeral Solution in Green Castle, Missouri.

All rights reserved. This obituary is also archived at obittree.com